We just recently came back from Phuket.  It’s our first family holiday out of town together and Baby Girl’s first trip out of the country. It was also our first experience of bringing the small toddling teeny human through the airport securities, immigration and all that jazz. At first the thought was intimidating hence the reason why I have been putting the idea on hold for as long as I can. But it turns out, little girl was a champ. Probably because she’s almost 2 and can understand quite well of the situation she’s in (I guess it’s a good idea that I waited as long as I did). No tantrum and no drama in both flights in and out of Phuket which was a huge relieve for me despite I did noticed she was experiencing some ear pockets (that uncomfortable sensation you got in your ears when there’s a pressure changes in the air space) during the journey because I experienced it too. I understand this can be scary for small children. Lucky for us, breastfeeding has made it easier for us because any slight discomfort baby girl is experiencing, she immediately will want to nurse and that saved us from us having to put a thick face in front of other passengers while dealing with a tantrum laced bebé. Plus she was such in a joyful spirit, she couldn’t kept quiet during the 1 and half hours journey. Of course there were times where she got restless. Which 22 month old baby doesn’t?  But like any 22 month old, she’s really easy to distract. And like any parents, we came fully loaded with distractions for her ( Ahem! my handbag weights more than 4kg) 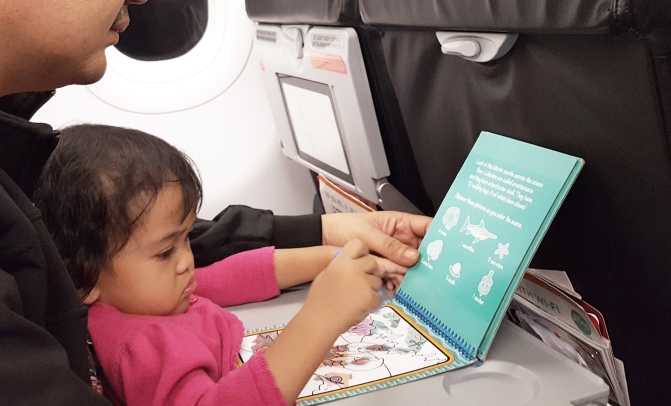 It’s was a very mellow holiday for us. Baby Girl was down with a motion sickness the second night we were there with a first sign where she vomited in the taxi ride halfway from Phuket Town to Patong Beach after we took her around to explore the Old Town on foot the first morning we were there. So after that, we pretty much spent our days there trying to lessen our journey in any moving object as much as we could for her. We spent much of our time in Phuket Old Town itself and went down to Patong Beach only when Baby Girl was in a better health and mood. A usual journey from Town to Beach will take us about 35 minutes. I insisted to opt only on metered taxi and usually we just used GrabTaxi (Uber is not available in Phuket) because of a stark difference if you hailed the normal(?) cab or a tuktuk and they always refused to use their meters when we asked. Ok, Tuktuk dont have meters but that doesn’t stop them from charging you exorbitant amount of money just because you’re a tourist. A journey from Town to Patong Beach will only cost 300 baht at maximum (including 50 baht service charge) if you use GrabTaxi as compared to if you flagged down a tuktuk or unmetered taxis. They’ll immediately will charge you 600 baht up front. So if you don’t plan to rent a bike (I heard it is a much better and cheaper option to travel around Phuket but we got a mini human and a stroller with us at all time) always go for GrabTaxi. So proud with our persistence of not using the blood-sucking tourist trappers’ services.

We decided to stay in Phuket Town for the entire 5 days we were there and we made a right choice after seeing Patong was so dense with tourists and the area is too overcrowded with bars and party scenes. 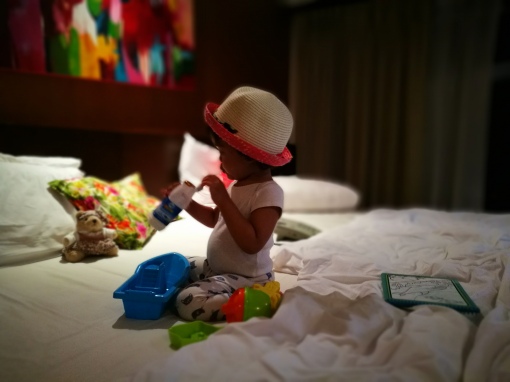 Ever since her vomiting episodes, I had to forego with the idea of traveling beyond wheels on gravels. Which means, of course, no speedboat on bumpy sea water (plus little miss-not-so-sunshine was terribly afraid of the seawater anyway). So I had to strike out going to Phi Phi Island from our itinerary. Lucky our hotel was strategic enough for a few short walks to some attractions in the Phuket Old Town itself and the Thalang Road was really close by. It was only a short walk from our hotel. Thalang Road is the main central street of Phuket’s charming Old Town with some of their Sino-Portuguese architectures still well preserved. 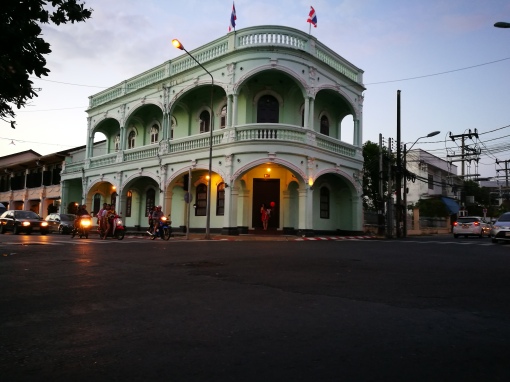 Taking a small child on a trip across the border was really a new experience for me. It was far more easy-going because for once, her well being plays a far more important role as compared as how much coverage we get to do on the trip. I can no longer have a list to stick to like before. Places to go and things to do will all be depending on how the Little Miss is feeling on that particular time. Which doesn’t really take much. A running around the playground near the hotel or a swim after dinner were enough for her before she surrender for the day. In fact that what make her the happiest. Definitely not a relaxing one because we got “an almost” 2 year old toddler running around in her littlest feet to care for but it was a good experience and I enjoyed every bit of it.

Initially I wasn’t intending to write a long entry and this is not going to be a blow by blow travel tips. Traveling tips to Phuket are not that hard to find. But mi esposo wrote an entry about his experience for his work here so I thought I’ll match his. Go read! It was a funny one reading from his perspective. He made it sound like he a stingy, grumpy old man in his article. I mean come on!! Spending your hard earn money on traveling (especially on us) is so worth every penny, dude! hahaha

Anyway like every family holiday that we go to (ok, maybe not “every”.. only when we have enough videos to put together), I’ll make him compile it into a short music video where the song is taken from the country we visited. The first video he made was this and I was inspired from then on to make more. Which means for you, Dear Husband… get ready for more traveling, Hanneh!

Original music is by this band.

Nevermind the title of the video though. Mi querido esposo has weird way in naming all his videos plus that was what Phuket is to mi bebé. You can hear it at the end of the video when she said her goodbye to Phuket (bye poo poo cat). This has already became Baby M’s favorite video. I cant wait for more holiday videos like this.